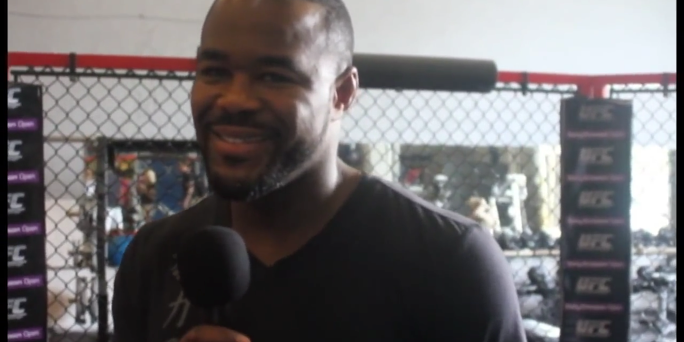 Former UFC light heavyweight champion Rashad Evans (19-4-1) is looking into getting back into title contention, but he is also spreading the word of the benefits of mixed martial arts training.

Evans fights American Top Team’s Glover Teixeira (24-4) in Tampa and will be tomorrow night’s UFC on Fox main event airing on FOX starting at 8 p.m.
During a media tour, Evans stopped by the Miami Dolphins training facility. He told The Roman Show that mma training is slowly but surely making its way into other sports due to all of the positives.

“MMA embodies a lot of disciplines of sports with footwork and with football especially with the punching technique you get the hand and eye coordination,” he said. “Any position really you use your hands. You learn how to use your leverage and that’s the wrestling aspect of it. The scary part of it is that I work with some of these guys and they are not using their body to full capacity that they have. They have potentially more power.”

Some former college and pro football players have crossed over to mixed martial arts and have had success such as Brendan Schaub and Herschel Walker.

“I didn’t get to spar with them,” he said, referring to sparring with current Dolphins’ players. “It was the first day. I talked to the new Dolphins head coach Adam Gase. I want to come back.”

Evans is originally from New York and although he trains in Boca Raton at the Blackzillians camp, he says he continues to be a Buffalo Bills fan.

Evans also talked about illegal substance abuse in mixed marital arts, which caused some fighters to drop out of the UFC on FOX fight card.

“Theres a lot of stuff out there that we are not allowed to take anymore. Another aspect of it with the label language,” he said. “Theres a lot that can be done help us fighters get educated. Over time it will get a lot smoother and fighters will know what they should take. They need to give us a list of supplements we can take and something that we can take. It’s tough you trying to get something to help you recover. “