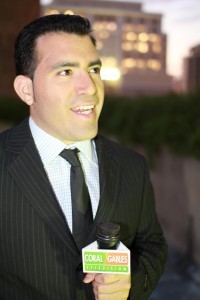 It was only fitting that Rodolfo Roman ventured into the journalism world.

Both his parents, Rodolfo Roman and Thelma Roman graduated with a bachelor’s degree in communications. Soon after, both worked for Nicaraguan radio and newspaper covering the revolutionary war.

Once the Roman’s arrived to the United States and gave birth to Rodolfo Roman he was introduced to journalism at an early age working alongside his father at a local radio station reading and writing news. It was the launch pad that defined his future.

After high school, Roman continued his career in journalism writing for two college newspapers, Miami Dade College’s The Catalyst and Florida International University’s The Beacon covering the police beat. While working on his Bachelor’s degree in communications and a minor in political science, Roman interned at The Miami Herald, WPLG Local 10 and worked for the Spanish political radio program Impacto on 1550 AM. Soon after his graduation in 2006 from F.I.U., he worked for The Key Biscayne Islander and CBS4 in Miami writing for the top rated 6 p.m. and 11p.m. news program. In the station, he helped produce several segments for the news program and assisted news reporters with stories. Not only was he active at the news station, but he wrote on a freelance basis writing for The Miami Herald neighbor’s section covering two cities: Bal Harbour and El Portal. At the newspaper, his stories included the ousting of a councilman, city elections and a front page story consisting of the robbery of a baby Jesus figurine, which made headlines internationally. He is still active at the newspaper.
In 2006, he returned to his parent’s homeland to cover the mayoral elections in Managua, Nicaragua for Cadena Azul 1550 AM and El Nuevo Diario de Nicaragua. In the Central American country, he also covered a dispute between the Nicaraguan and United States army regarding military weapons.
With a background in amateur and professional wrestling, he also took on a new task covering the growing sport of mixed martial arts. Right now, Roman writes for the ever popular and most trusted MMA website www.sherdog.com, where he has covered several shows including Strikeforce and interviewed fighters such as UFC heavyweight champion Cain Velasquez and Strikeforce heavyweight contender Bobby Lashley. He also writes and is a guest on the Hispanic MMA podcast program El Octagono. Roman has also written several press releases for upcoming MMA events and is a frequent ring announcer. His work includes ring announcing for Mixed Fighting Alliance, G-Force and Alpha Fights.
His passion for news and politics shines at Coral Gables Television where he currently produces, hosts and reports on community news. Roman has produced award winning programs such as Our City Our Gables, which won a Davey and Empixx award. He also has produced several segments covering political figures like former president Bill Clinton, recording artist Pitbull and National Football League player Andre Reed. Following his love for sports, he covered the All-American High School basketball game and interviewed the future stars of the sport.
His goal is to excel in his love for the profession of journalism providing accurate and educational information for viewers and readers all over the world. The Miami native’s goal is to be a correspondent for a major national television network covering Latin American government issues. He is available for full-time work ready to take your television station to the next level providing concrete viewership.