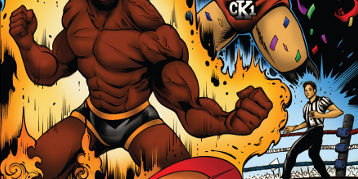 It has been a wild year for FIP World Heavyweight Champion Caleb Konley.

Not only is he a champion at FIP, but TNA Impact Wrestling announced late last month that he has signed with the company.

But one man can put a dent on his moving career that’s Fred Yehi and he can do it at Full Impact Pro Accelerate taking place at the Gods & Monsters in Orlando, Fl. May 27.

Konley joined The Roman Show to talk about his upcoming battle with Yehi.

“He won a battle royal to get this opportunity,” he said. “Fred has blown up in the past couple of years. He came out of nowhere honestly. I remember seeing him at a show in Georgia saying to myself ‘who is this guy wearing this Teenage Mutant Ninja Turtles pajama pants?’ He has done well for himself now it’s his opportunity. I look forward to it.”

TNA Impact Wrestling recently made the announcement of signing Konley. He is grateful for the opportunity and talked about whom he’d like to wrestle in the company.

“A lot of those guys I’ve been fortunate to have wrestled in the independent scene especially the X-division guys. There are other guys I haven’t work with like Rockstar Spud who I think are doing well. I’d like to get in the ring with them and Crazzy Steve.”

He also talked about veteran Matt Hardy helping him in Impact Wrestling.

“I’ve known Matt and Jeff Hardy for a while,” he said. “Matt was positive of me being in TNA. He put in a good word thinking I would be a good fit. Al Snow… I spoke to him on the first day. He told me to show that I am a star. Al snow has been influential for me.”

Hear Konley also talk about his previous jobs before being a full-time wrestler, his signing with TNA Impact Wrestling, and more.