The crowd was hyped. All I heard were drums, maracas, and singing. I felt like I was in Puerto Rico or Calle Ocho. Rum was being passed around like free food. And, all I heard was, “Yo soy Boricua, papi, pa que lo sepa”. However, personally, I felt like crap because U.S.A. team got embarrassed by the Puerto Rican team yesterday, here, in Miami, Florida. They got knocked out 11-1. In fact, they had to stop the game early because of the rules, so I didn’t get my full 9 nine innings of baseball. I walked with my girlfriend with my head down. Pissed. Jeter and Peavy, who won the Cy Young award, just weren’t enough for the Puerto Rican team. They slaughtered us. Not only did we get clobbered, but we were just a hand full out of the more tan 30,000 people who attended the game. It was in one word, pathetic. So, tomorrow, P.R. vs Venezuela. Let’s see who wins and, hopefully, the U.S.A. could rebound from that horrible defeat. Today they beat the Netherlands, so I still believe. Yet, the experience was great. Just watching the Puerto Ricans partying, was enough for me. I’ll post some pictures from the game. 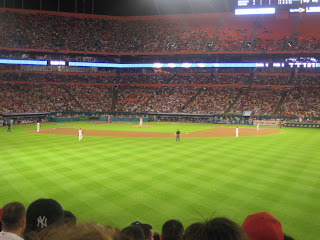 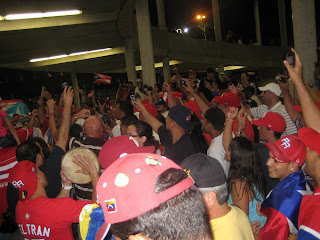 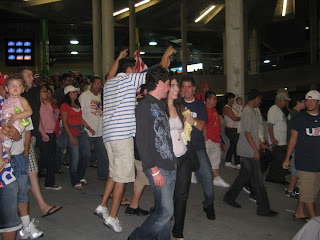