Valerie Letourneau Says Being An Underdog Is an Advantage 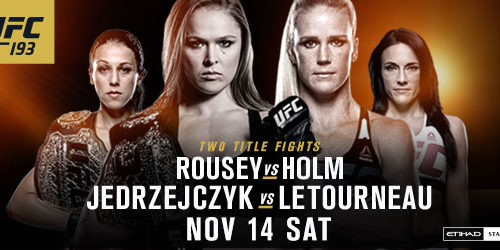 American Top Team standout Valerie Letourneau will have the biggest fight of her career against UFC straw weight champion Joanna Jedrzejczyk, but the Canadian says her opponent has the biggest pressure.

Letourneau joined The Roman Show days before her big fight her voiced her opinion on her foe.

“She’s a great fighter,” she said. “The girl she has fought make her better cause they couldn’t exchange with her. They didn’t have the tools to win the fight.”

Both meet part of the UFC 193 fight card November 14 in Australia where the promotion expects to break an attendance record.

“I try not to think about it,” she said. “I went for the media tour. The octagon looks so small inside the place. The record now is 55,000 for the UFC in Toronto. The stadium sits 70,000 hopefully we beat the record.”

The Canadian used to train at the popular gym in TriStar Gym in Montreal. But she left her home country for Florida.

“I needed new energy,” she said. “ATT had a lot of girls for mma girls. I didn’t have a lot of girls to train with in Montréal. It’s been a new change but it’s a new vibe and energy. I am sure it has worked out.”

She later added, ”Being an underdog makes winning more exciting. There’s a lot of pressure on her.”

She also talks about training with Cuban UFC fighter Hector Lombard and more.