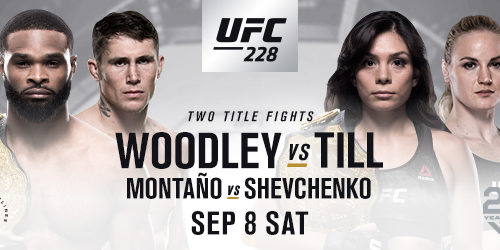 UFC welterweight champion Tyrone Woodley can’t play it safe if he wants to keep his strap.

Woodley defends his title against the young undefeated British Darren “The Gorilla” Till at UFC 228 September 8, 2018 from the American Airlines Center in Dallas, Texas.

Till has defeated all his foes inside the octagon and has the likes of former title contender Stephen Thompson, Donald Cerrone and more. He is more than willing to take a risk to walk away with gold wrapped around his waist.

Woodley’s last three fights haven’t been too impressive as he earned unanimous decision, majority decision and a draw.

Sascha Paruk of Sportsbettingdime.com had this to say about UFC 228: “Count the general public among the believers in young Darren Till. The undefeated Briton opened as a +120 underdog (roughly) in his welterweight title fight with champion Tyron Woodley, but thanks to bettors pounding the underdog, it’s now difficult to find him at plus money and he’s as short as -110 at a couple sportsbooks. That’s a huge leap for a challenger against a champion as seasoned as Woodley, who hasn’t lost since 2014. But the 35-year-old American hasn’t exactly looked dominant in his last three fights, which include one draw (vs Stephen Thompson), one majority decision (again vs Thompson), and no finishes.”

However, if Woodley gets through Till, the fight to make would be the American Top Team product versus the former welterweight champion Georges St. Pierre.

A fight that was many fans were expecting to see tons of highlights has been scratched. Yair Rodriguez has been forced out of his fight against Zabit Magomedsharipov with an injury. Rodriguez was cut from the UFC unexpectedly in May for allegedly turning down fights but resigned the follwing month.

The rest of the fight card includes: