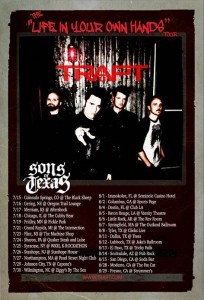 Trapt’s frontman Chris Taylor Brown and his band are coming to a town near you, but he opens up about issues that led to incredible lyrics to their upcoming DNA album.

The Roman Show caught up with the singer of Headstrong on their visit to Florida. He said he recently has had some anger issues due to some issues from a past band member. Trap is on the road with Sons of Texas with “The Life on Your Hands” tour. Click here for details.

“There were some anger issues about some other stuff,” he said. “I wanted to tell the fans that hey I am an emotional guy. I don’t think I would be writing lyrics if I wasn’t an emotional guy.”

Recently, Brown confronted a member of an opening act in the parking lot. The conversation got hot over an argument, but it was more words than a physical confrontation. He took to social media to address the issue and credited his past anger issues for the act.

“During that time with the first guitar player coming back, there was a lot of stress and it put a lot on the emotions. I was numb for a year and a half. I didn’t know what was going to happen,” he said. “It started a fire in me and the lyrics for the album came out quickly.“

Their latest album DNA is set to be released later this year. He added that fans can expect the best of Trapt in the album.

“The best art comes from paint,” he said.

However, fans can hear the new music at the “Life in Your Own Hands” tour.

“People can I expect to hear new songs like Passenger and Human also Tangled up in you,” he said.

He added that fans can expect a little bit of everything at the show.

“We have a great set and an inspiring album,” he said. “It’s a good mix of what we have put together.”

He also spoke more about the confrontation, bloggers and more.