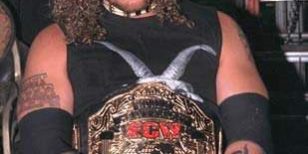 The Roman Show interviews former ECW/TNA/WWE/WCW star Raven along with Josef Von Schmidt. Make sure to pass the word.