The donkey outsmarts the Elephant

It’s not looking bright for the Elephant. The donkey seemed to outsmart the strongest animal in the jungle.
According to the latest results, 24 percent under the age of 30 came out to vote in the mid-term elections giving the Democrats an edge. Issues like the war in Iraq, change in congress, GOP scandals have tainted the party’s image. This has been the highest youth turnout in 20 years. Such groups as Rock the Vote were part of the movement, which motivated the young to hit the voting polls.
Now the Republicans skies look cloudy as the Democrats hold power in Congress both the House of Representatives and the Senate. But, before the donkeys start celebrating they should thank the bloggers.

Democrats brought a fierce power to the table. So fierce that Defense Secretary, Donald Rumsfeld resigned from his post. Rumsfeld had been under a lot of heat, after not being successful in the war in Iraq. Many blame President George W. Bush’s administration failure to study Iraq. Pundits say the administration moved too quickly without planning. It was more like a desperate measure. According to Bush, he said that Rumsfeld would stay with Bush, until his presidency. But, that’s not the case. Bush said Rumsfeld’s resignation had nothing to do with the Democrats taking control of Congress because he said he had spoken to Rumsfeld prior to the mid-term elections. So who would replace him? Well, it happened fairly quickly: Former CIA member, Robert Gates, replaced Rumsfeld. Most of the complaining was done on blogs.

Now with the Democrats in control, Blogs are creating a craze. The one’s who Blogs are risky: Many post incorrect facts causing mayhem in the media. Political pundits are individuals who love to blog. They are constantly checking what is new and at times posting false information.
A new party, now, seems to be significant in congress. This is all thanks to a little blogging support. Junior senator from Vermont Bernie Sanders, political independent, is an icon in the blog world. He won’t be the only independent because Connecticut Senator, Joe Lieberman might be able to be a part of the independents. He is also acclaimed by bloggers. Independents will not be the only ones with a change in Congress: Now that the Democrats won, they will have the first women in charge as the Senate majority. That’s something not liked by the Republicans.
To start the ball rolling: Let’s talk about money and how much it goes into a campaign and how blogs help raise funds. Look how desperate they manage to be; for example, MoveOn.org Political Action is offering a $250,000 reward for new material evidence leading to a felony conviction for an organized effort of partisan voter suppression or electronic voting fraud.
An important note I would like to mention is that Republicans dug themselves in a great big hole because of the child-molestation of Marc Foley. At one point the seemed to be the party to beat, but citizens are realizing that the Republicans don’t’ come out to play. This was a hot topic among bloggers. The constant bashing on the internet and by the media was enough to send Foley in a cave next to Saddam.

A couple of blogs point out to, radio host, Rush Limbaugh, and his way of thinking as an advantage for Democrats. He ridiculed Michael J. Fox who supported stem cell research and has Parkinson’s disease. Some of the wording by Mr. Limbaugh gave the advantage to the Democrats and allowed them to be in control of Congress. Limbaugh made the Republicans image even raunchier. The last time Democrats held power was in 1994, when Bill Clinton was president. Limbaugh must be taking some of his tranquility pills after the loss.
Well, this will surely set up what’s expected on the 2008 elections. By that time, blogs might be a bit more convincing. I hope. Most of the blogs in respective to the elections are basically gibberish talking badly about each candidate without proper evidence. Some who write are professionals, while some are your Wendy’s workers.
Not only did the Democrats take over the house and the senate, but the rule in governorship. It seems like America wanted a change. 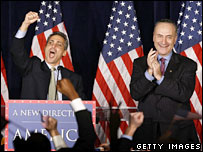