The crying isn’t worth it; Zelaya show should stop 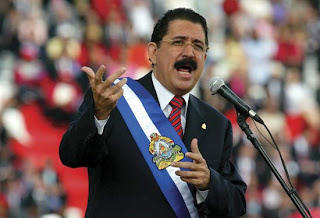 The drama continues for former Honduras president, Manuel Zelaya as he pleads for the current administration to let him back inside the country he once led.
Now, Zelaya is stationed on the border of Nicaragua and Honduras sleeping inside a tent, screaming via a megaphone to Honduranian military men, “Let me in”. Friday, he made an attempt to enter his native land, but he only got 16 feet. Wearing his famed white cowboy hat and his mustache, he went back crying to Nicaragua where his “friend” and Sandinista/Nicaraguan president, Daniel Ortega offered Zelaya hospitality.
Before camping in Ocotal, Nicaragua, he has traveled the western hemisphere on his quest to once return to the Honduras presidential house. The soap opera started late June when the current government woke up Zelaya, who was wearing his pajamas, at gun point rushed him to the nearest airport and sent him into exile. Zelaya had six months left on his presidency. The current government said if Zelaya were to return he would be put in jail. Zelaya, at one point, called for a national referendum that might have allowed him to redraft the constitution.
His opponents said Zelaya wanted to extend term limits on the presidency. However, Zelaya said he wanted the country to speak and decide. The new government is now calling for elections in November. International governments aren’t accepting the new government nor validate an election. Zelaya is now aligned with socialist, Venezuelan Hugo Chavez, who along with his boys, Ortega, Ecuadorian president Raphael Correa, Bolivian president Evo Morales and Cuban leader Raul Castro make up the group, ALBA.
So, my question is: How come they let Zelaya travel all over Central America and North America? Who is paying for this and how come, we, allow this to happen when we are known for stopping drama.
Secretary of state, Hillary Clinton has dialogued with Zelaya only to come up with no conclusion. The press, unfortunately, has followed Zelaya steps from the beginning. Sure, the news sales, but seriously, is all the drama worth considering he only has about 100 people standing by his side on the border. It is sad to say, but there is as much Zelaya followers as reporters.
In the end, we can all conclude that Zelaya will either return home and be in jail or be exile somewhere and cry that he wants to finish his presidency, which will conclude by the time that happens. All the crying and whining will lead him to nothing.