The Castor Troys EP had been in the works 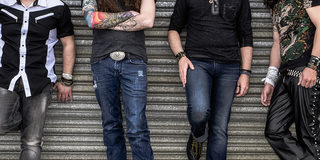 The Roman Show spoke to the Chris Ledroit and Matthew Bowker of the band to talk about the EP available on Spotify.

Ledroit said the EP has been in the works.

“We’ve been working on these songs several of year old but about two years. We’ve demoed them up. We have mixed them with our producer,” he said. “He had some suggestions and we reworked the songs a little bit and the lyrics. It was a slow process. We took our time with it.”

Bowker also spoke about the inspirations behind the lyrics. Hear the interview below.

“The lyrics come from different places like Black Out Love comes from when we had a blackout 2003 where parts of Canada and the United States all lost power,” he said. “Instantly lost it so Black Out Love is a fun little love story when this night that it happens you meet someone having a great time and next thing you know you have a great memory of someone you had a great time with but you didn’t get in depth with.”

The Castor Troys- We Are One

Formed in 2013, they released their debut full-length album “Come Hell or High Water” in May of 2015 and their 6 track EP “Legends Never Die” will be due out November 9, 2018. Working with producer Andre Kaden Black and engineer Tal Vaisman (Ascot Royals) has refined the band’s sound and enabled them to capture the fierce energy of their live performance onto record.