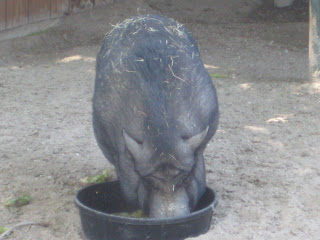 As the Swine flu news begins to die down and the media turns its attention to on another issue, it shocks me how the story has been blown out of proportion. Unfortunately, people have taken the media’s word and hysteria has grown in the country over something than in a matter of days will be old news. Next year, we’ll look back and laugh at the fact that a virus from a pig was considered “deadly”. We will laugh at people walking in downtowns wearing masks. Halloween is monthsa away. Before I get in to some details, let’s take a look at the latest figures as of May 5, 2009, which mind you, today, is supposed to be a day of celebration in Mexico, but because of the swine flu the Mexican government canceled the biggest events.

So far, the World Health Organization has confirmed 1,490 swine flu worldwide and 30 deaths. Here in the United States, 403 people got the flu, while there are only two deaths from the H1N1 virus.

Now, let’s take a look at how the economy has been affected by this thing, Mexico ’s finance secretary says the flu outbreak has cost Mexico at $2.2 billion. Airline companies are complaining as well because they have had to cancel flights to the country. Tourism is Mexico’s third largest source of foreign income.

How about you take this into consideration: CNN reported that in the flu season 2007-08 around 36,000 people died. More than 200,000 people were affected by the flu. Why didn’t the media create hysteria over this?

This craziness has caused a lot of problems including the death of several innocent pigs. Egyptian leaders called for the killings of the animal in light of the swine flu scare. Remember, Muslims don’t eat pork, but Christians who live there do. So, the killings might be religious driven. Nonetheless, the pigs were killed due to this scare.

In conclusion, the media overhyped this H1N1 virus. It’s evident that there was nothing else to report other than the miserable economy, but then again who wants to hear more depressing news. Thus, you scare the public and give them something to talk about. The winners in this fable are the hand sanitizer and soap companies, and anything that deals with hygiene. All the procedures the media is addressing such as wash your hands and avoid being close to people who sneeze should have been practiced already in the first place. These are measures that should be followed by people. It’s nothing new. The latest news is that the virus might come back next winter and with vengeance. They could hype this story all they want, but folks, it is not the end of the world and we shouldn’t make this the big deal we are making it out to be.