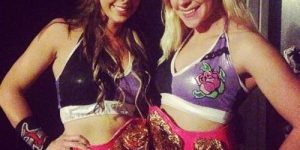 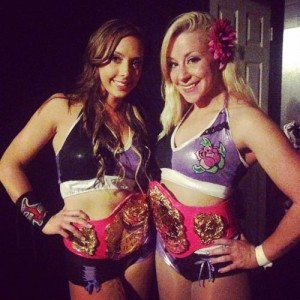 Kimber Lee joined The Roman Show for an interview in anticipation of their her upcoming match at SHINE Wrestling 27 scheduled for May 15 at Ybor City, Fl. The event will stream on www.wwnlive.com. Also on the card, SHINE champion Santana defends her title against Mia Yim. Watch SHINE 26 recap.

She is one of the Kimber Bombs, which comprises of Lee and Cherry Bomb. They will put up their belts against the Legendary Brandi Wine and Malia Hosaka with Leilani Kai.

“It is slowly making its way in even in independent am starting to see it show up,” he said. “There are many of us. It is another style of wrestling. There is a different flavor when there is other people there.”

Kimber Lee, real name Kimberly Ann Frankel, says she is gratified to have Cherry Bomb as her tag team partner. She calls her partnership a “beautiful accident”.

“We clicked from the beginning and quickly took over women’s tag wrestling,” she said.

Kimber Lee says her team will take on anyone and will accept any challenge.

In the interview, the champion talks about her passion for dancing and her role model, former WWE diva Chyna.