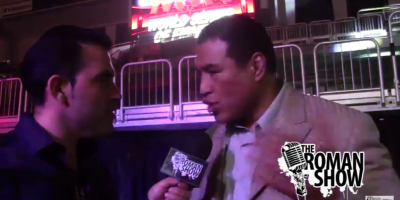 As a fighter, Ray Sefo understands the difficulties and struggles to find a spot on a major fight card that’s why when fighters send a message whether its by social media or e-mail he makes sure to respond.

The World Series of Fighting president joined The Roman Show to talk about fighter’s reaching out to him for a spot on upcoming card and more.

Sefo said he receives several messages, but tries to respond as much as he can.

“(I get messages) at least every other day I get a message by e-mail, social mail,” he said. “I get a message asking for an opportunity. I do my research. I get messages from guys that are 45-years old and have a 3-5 record. My advice is get some wins and let’s see what we can do when we come to your state or area.”

He also voiced his opinion about fighters fighting in their late 40’s or 50’s.

“In my experience in MMA and having experience with promotions am pretty sure all the other promotions don’t want to have a promotion with guys that are over 45 or 50,” he said. “In reality who wants to watch guys over their 50s? There are guys that are in their 40’s that train but guys who wants to see that. It’s a young mans sport whether its mma, boxing or kickboxing.”

He also talked about upcoming WSOF fight card, fighters to keep an eye on and more.