From These Ruins working on new music for 2018 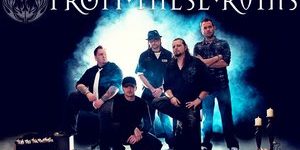 From These Ruins is looking to put new music in 2018.

Band members Chad Anderson and Rusty Sparks said the band didn’t take any breaks, during the holiday season. On the contrary, the group put pen to paper and fans should expect new music real soon.

Both Anderson and Sparks joined The Roman Show this week.

“We just got off the tour,” Sparks said. “How it works is around the holiday season is when we write. We’ve gigged the previous album and get back in the studio and start writing some music. We just released
a single to get the ball rolling recently.”

The band’s last work was in 2016 with the release of their debut album, Advocate of the Unwanted. Anderson described the process of putting music together.

“We get together once a week collectively,” he said. “Each of us outside we are working on new guitar riffs or new song ideas when we become together if we are lucky twice a week that’s when ideas are
springboard off. It’s kind of constant when we aren’t on touring mood.”

Advocate of the Unwanted – Album Teaser

Band members also talked about how their faith plays a role in their music.

“The process is founded on my faith, but I try to include everyone’s experiences and life experiences, hardships whether it is positive or a negative thing just like Unwanted,” Sparks said. “Everyone has
experienced a moment where they have felt unwanted, not liked, didn’t have friends, depressed or whatever. I have been through that when I was younger…”

Hear the complete interview as the band also talks about how their music inspires, touring and more.