Punishment Martinez is focused on breaking bones and skulls 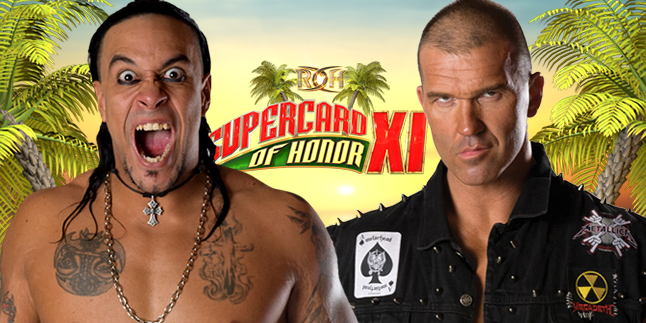 Powerhouse Punishment Martinez has been making headlines since he joined Ring of Honor and he doesn’t plan on stopping.

Martinez will meet his toughest opponent to date in the promotion when squares off against veteran Heavy Metal Rebel Frankie Kazarian in already stacked Ring of Honor Supercard of Honor XI at the Lakeland Center, April 1.

“We are going kill it,” he said. “This is probably my biggest single match in Ring of Honor. I don’t intend to hold back. If anyone thinks what I did in Japan or at the 15th anniversary card is all I have they are in for a big surprise because I am just getting started. I am looking to steal the show.”

A victory over Kazarian could potential set Martinez up in title contention. He voiced his opinion on current ROH world champion Christopher Daniels.

“He is a wrestler that I have watched for a long time,” he said. “I have respect for him on a business and professional level. He is everything that a pro wrestler should be but with that being said I am not the cookie cutter mode. I haven’t claimed to be the best in the world. I am about bringing pain, violence and delivering hard-hitting matches. With Kazarian, of course, a victory over him would put me over and possibly into title contention. But that’s not my goal. My goal is to punch someone in the face, break their backs, break their skulls and bones and move on from there.”

He said he has been a fan of both Kazarian and Daniels.

“They are fantastic,” he said. “I followed them for years. They are great as a team or singles. I know all about them. There is nothing but respect on a personal level. That’s going make me do more to stand out because I know the opportunities I am being given. When am faced with this opportunity, I feel sorry for Kaz and Daniels your going to be in the ring with me.”

Hear Martinez talk about being part of ROH, the Supercard fans, the status for Latinos in professional wrestling and training in martial arts.