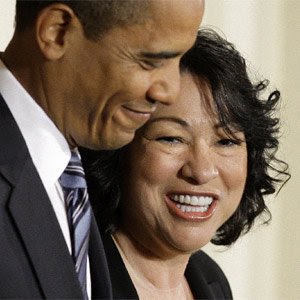 Just a few moments ago, President Barack Obama made the announcement that federal appeals judge Sonia Sotomayor will succeed retiring Justice David Souter making her the first Hispanic Supreme Court justice.
In my opinion, this is a great selection considering that Mrs. Sotomayor will bring a fresh new mind to the table and the fact that she is Hispanic is an accomplishment for the millions of Hispanic-Americans in this country.
Sotomayor has a love for the Constitution and has an inspiring life story. Her mother, who emigrated from Puerto Rico, raised her after Sotomayor’s father died. Sotomayor battled with a health issue at an early age: Sotomayor suffered juvenile diabetes that forced her to start insulin injections at age 8.
She is a graduate from Princeton University and Yale Law School, which are two honorable schools in this country. She is passionate about baseball having been growing up near the old Yankee stadium.
Nominating a Hispanic-American brings a new light to the Supreme Court and will be inspiring to our youth. This comes to show you that reaching your goals and dreams are still plausible here in this country. It just takes time and hard work.