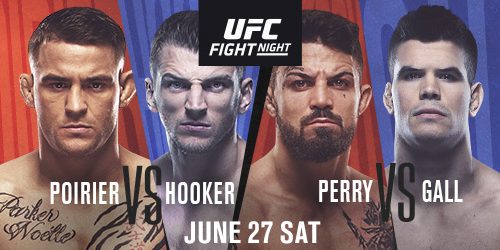 If former interim lightweight champion Dustin Poirier (25-6) and Dan Hooker (20-8) want to have a shot at the strap, both fighters better focus on what is at stake this weekend.

Poirier and Hooker meet in the main event of UFC on ESPN 12 this Saturday.

Hooker has been in on a roll defeating Paul Felder, Al Laquinta and James Vick. His last defeat was against Edson Barboza back in 2018. Meanwhile, Poirier is coming of a lost against the current lightweight champion Khabib Nurmagomedov.

The betting odds favor Poirier, however, both men better keep their focus on Saturday’s five round warfare. Click here to get all the betting sites available in NJ.

Both men have taken to the press to share their thoughts on the upcoming fight between Numagomedov and current interim champion Justin Gaethje in a unification bout. The date for the fight is still to be determined, but Ultimate Fighting Championship (UFC) officials have said the duo could take place this fall.

Gaethje and Poirier have Nurmagomedov coming out victorious, but don’t rule out Gaethje on handing the Russian his first loss.

In an interview with MMAFighting.com, Hooker said, “I’m definitely interested,” he stated. “Gaethje, if you’re describing a skill set that would give Khabib trouble, it is Gaethje’s skill set. An incredibly strong defensive wrestler who’s very handy on his feet and can dish out a lot of damage. Great cardio being five rounds. Very comfortable being in a main event spot.

The winner of Saturday’s main event will no doubt be under the radar of potentially obtaining a shot at either Gaethje or Nurmagomedov.

On the contrary, Poirier handed Gaethje a defeat back in 2018 when he knocked out the Arizonian in the fourth round.

Poirier said he considers the fight a “fight of the year” and would entertain a rematch. He believes the second fight could be as exciting as the first.

In another intriguing fight part of the Saturday’s fight card, Mike Perry (13-6) will battle Mickey Gall (6-2).

The ever-entertaining Floridian, Perry plans on getting back on the win column after suffering two consecutive defeats by the hands of Geoff Neal and Vicente Luque.

On the other side, Gall is coming off a victory against Salim Touahri by way of unanimous decision.

A victory for either Perry or Gall can help bring confidence to climb the ladder for a potential shot at the welterweight belt. Although, it will be just a steppingstone.