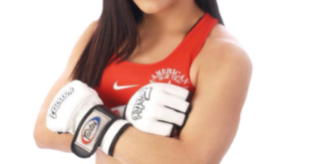 The young fighter will meet Jenna Serio (3-1) on the Combate Americas fight card, a promotion dedicated to Hispanics, airing on UFC Fight Pass Friday, October 14. The event will be the first mma show in New York ever since the state legalized the sport.

Granados said she is ready for her opponent and knows her weakness.
“She is from New York from what I see she has a karate style,” she said. “She is aggressive but so am I. I think a little bit more evolved and smarter than her in the fight game. She’s a little bit reckless, which could be her downfall.”

Hear the interview ,below.

She later added, ”I am looking to look for the opening. She throws a lot of hooks. That’s something I will capitalize on and take her to the ground and submitting her.”

Granados also said mixed martial arts got her out of trouble and painted a positive future for her.

“It saved my life because living with my dad after high school I didn’t have anything,” he said. “My outlet were parties. So instead of going downward I uncovered Muay Thai and it was my new outlet.”
Hear more of the interview by clicking above.