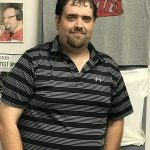 The Roman Show correspondent James Hand spoke to the champ who gave us details on her training seminar with legendary Dr. Tom Pritchard. She also explains training with NWA Champion Brandon Xavier. She is scheduled to defend the NWA Women’s title at the next show, Redemption September 3, 775 N Main Street, Marion, Ohio.

The champion started training professional wrestling for about two years. Joseline, who has wrestled for the SHIMMER, talked about participating at the upcoming Battle on the border women’s tournament in Indiana, September 9. She is batting Paloma Star. The tournament will crown a champion.

She talked about, who she would like to face in the future, NWA’s Angel Dust and Samantha Hyde. Keep an eye out for her and enjoy the talent in the purest form of a young star in this business.

She also talks about future opponents such as Katie Arquete and more.