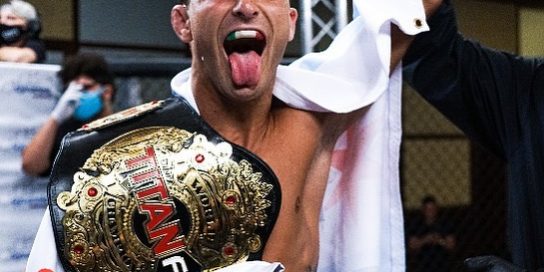 Sabatello defeated Raymond Ramos (5-4) by way of submission in the first round to earn the strap at Titan FC 61, which can be watched on UFC Fight Pass.

The Roman Show spoke to Sabatello about thrash talking and how much it damaged Ramos mentally.

“I like to talk thrash talk,” he said. “That’s who I am and I love everything about it.”

“I love the emotion that comes with it and the build up to the fight. I love the mind game of it, but some people can’t take it and they fold.”

Moreover, Sabatello extended his hand to put the thrash talking to rest; conversely, Ramos turned down the offer.

“I really like to thrash talk beforehand that is what we are doing, but to me once the fight ends, it is done.”

“I want to hit you with a bus before the fight and when the fight ends, I’ll be the first one to buy you a shot of vodka.”

“Once the fight was over. In my mind it is over.”

Futhermore, he elaborated, “I go over to him and shake his hand. I am being cool saying ‘it was nice fight’; he was still pissed and that pissed me off, so we went at it.”

“(Ramos) looked like a fool because I just tapped you, made you look like a bitch under two minutes and second off the fight is over. Once it is done there’s no need to talk anymore thrash; it is nothing but respect.”

In May, Ramos and Sabatello were set to battle.

“Anytime I hear you pull out of a fight I think it is BS,” he said. “Sometimes it can happen because you get injured or sick; his reason was that he was ready.”

“That’s just bullshit that’s amateur hour. You have this fight scheduled I don’t care if there is a pandemic, we are in a fight camp and just ten days before you say ‘no’.”

“I was pissed about that.”

The Purdue wrestler has already fought three times this year. In February, he was defeated by the former bantamweight champion Irvin Rivera, who is now in the UFC.

In the meantime, the American Top team standout said that loss–which is his only one in his professional career–turned him into a beast.

“The loss will teach you a lot. I would like to run that won back and have a win, but a loss can be good if you treat it right and get knowledge out of it,” he said.

“I am hungrier now; I am more mean and I keep my composure too I don’t lose my cool.”

If Titan FC were to offer him a fight in the next few weeks, the champion said he would be ready to go.

Pandemic or not, Sabatello said this year has been a great opportunity and he plans on enjoying it.