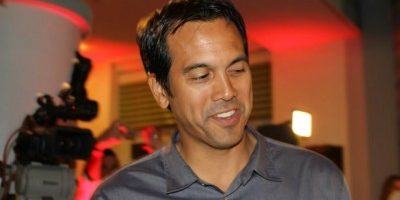 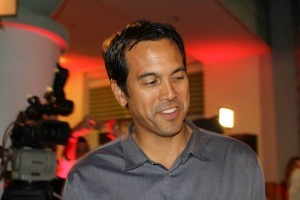 After a tense Miami Heat victory against the Phoenix Suns, the team’s coach Erik Spoelstra joined teammates and colleagues for a night of karaoke.

Spoelstra joined the fun at the annual Battioke to benefit The Battier Take Charge foundation.

Former Miami Heat player Shane Battier hosted the “South Beach Battioke” at the Fillmore Theatre in Miami Beach. The event benefits The Battier Take Charge, a foundation dedicated to providing resources for the development and education of undeserved youth and teens.

The Roman Show caught up with Spoelstra during the event.

“I am here to support Shane,” he said. “It’s one of the most creative events. We view Shane as a Heat Lyfer. That means forever. We support everything he does specifically for a foundation that benefits his others.”

When asked if he had coached Battier on karaoke, he said, “I have not coached him. He has no shame on stage. He is fearless. He is horrible. He is wonderfully horrible. But he loves it and he gets everyone to have fun.”