Thousands of fists in the air. “Hey, hey, hey…”being yelled by thousands of head bangers, who raised their devil horns. These were just some of the sites and sounds at the Bank Atlantic Center, when Metal pioneers, Metallica stormed into the arena and rocked the house last week. The crowd franticly head banged and went wild with the night’s opening song, “That was just your life”. Lasers accompanied by sounds of a heart beat started the night, while bassist Trujillo in the middle of the stage, with the spotlight on him, dazzled the crowd. I must admit, I vaguely remember thanks to Mr. Absolute, but I sure remember the hard sound coming from the stage. I’ll be adamant, there were a lot of fans who were Metallica virgins; in fact, I think the majority of the crowd had never been to a show. Being a pit veteran, I have already seen Metallica two other times and both times have been amazing. The rock star legends never fail to perform. The set-list was decent this time as they dedicated more to their new album “Death Magnetic” which isn’t too bad, but for us Metallica fans, we prefer the old school stuff. You know, the “And justice for all and Ride the Lightning” stuff. The four horsemen also played, “Damage Incorporated”, which was a shocker; as well as, the usual suspects like “Master of Puppets”, “One”, “Nothing else matters”, and “Enter Sandman”. The highlight of the night was the crowd, which was really into it. At the end of the show, during the last song, “Seek and Destroy”, the band turned the lights on and dropped black beach balls from the rafters. I don’t think the beach balls survived. After the song, I really thought they were going to continue playing because the crowd didn’t want them to leave. After playing for well over two hours, the people were still chanting, “Encore, encore…” More than likely, after that reaction, I know these guys will be back in South Florida rocking the Sunshine state.

Meanwhile, before the band got on stage, outside was a mess. The Bank Atlantic Center staff sucked. They weren’t letting the rowdy crowd in, for some reason, they were acting like morons. Hundreds of people who stood outside waiting to get in yelling and screaming because as simple as getting in is, they made it hard. It almost felt like going to the airport check up. Mind you, a scuffle broke out in front of me. I almost gave my girlfriend a heart attack, when some fat dude, who acted obnoxious, was picking a fight with everyone for no reason. Eventually, the retard ended up hitting a girl, so her boyfriend stepped in and the mini fight started. So, me, trying to act like Ghandi stepped in. I had no chance, but to take down the dude defending his girlfriend with a single leg take down because he was going to knock out the drunken dude. Once the guy was on the floor, I pushed the fat dude to the wall that’s when the cops came in and arrested both of the drunken morons. In the end, I got some scars and bruises. Its part of the fun friendly violence a rock concert brings. So, the show was amazing and left everyone wanting more Metallica. It’s about time we get a good show, instead of the he-she performer, Lady Gaga. Rock on… 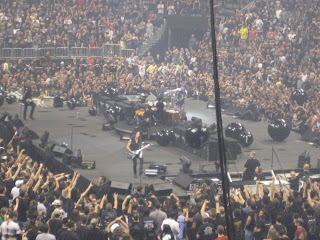 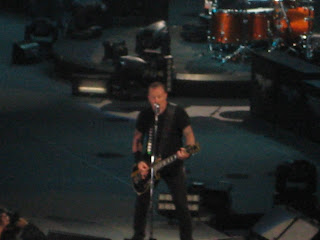 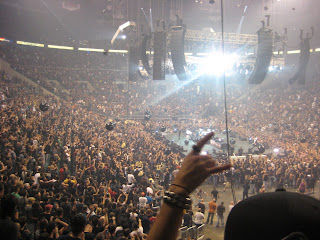