Max Holloway vs Brian Ortega will deliver at UFC 231 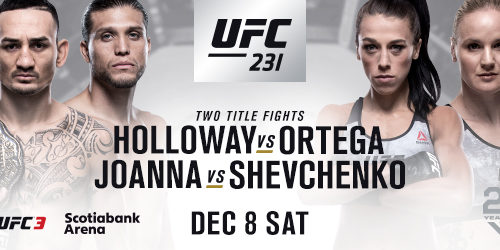 Courtesy of the UFC

By The Roman Show staff

UFC featherweight champion Max Holloway will defend his gold against top challenger Brian Ortega at the upcoming UFC 231 in a fight that was supposed to take place earlier this year.

Holloway was scheduled to fight Ortega at UFC 226, but the Hawaiian was yanked because he diagnosed with concussion like symptoms. Obviously, this is something that could lead to brain trauma and doctors suggested to pull him off the card.

Now, both will meet December 8 in Toronto.

It appears the odds are in Holloway’s favor, but be sure to do your research for betting sites online that are safe before you put any major money down on the fight.

The undefeated Ortega is no slouch. He is the only man to have knocked out former champion Frankie Edgar back in March. He won’t the night’s performance of the night bonus. The Mexican American fighter has defeated Cub Swanson, Renato Moicano, Clay Guida to name a few.

Meanwhile, no one knows what condition Holloway is currently in. Would he have second thoughts of fighting knowing that he experienced concussion like symptoms?

Will we see a more cautious champion unlike the one we have seen in the past because he wants to protect himself?

These are questions which would be answered in just a short time, but consider that Holloway has only faced former champion Jose Aldo in relation to the title. Last year he defeated Aldo to capture and defend his title. On both occasions, he knocked out Aldo, who hasn’t been the same ever since he lost to former champion Conor McGregor, who Holloway lost to in 2013 by way of decision.

Keep a close eye on this fight because both men like to brawl, but if Ortega takes it to the ground we might have a brand new champion.