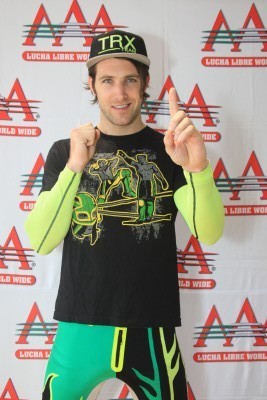 Lucha Underground Angelico says that the Mexican style of wrestling is surely fitting in with American wrestling fans.

The former Lucha Undergound trios Champions says fans are catching on thanks to all of the action a three-on-three provides.

Angelico joined The Roman Show for an interview and voiced his opinion.

“Its more difficult in some ways and fun in some ways,” he said. “I look at it as a plus. Instead of having four you have six wrestlers. More activity comes out of six than four people. It’s non-stop action.”

Angelico, Havoc and Ivelisse were the Lucha Underground trios champions.

Hear the complete interview by clicking below.

The South African also shared his experience training professional wrestling in his native country. He trained at a company where WWE hall of famer Booker T played a role.

“I don’t know how much a role he had. He was never there. They had the same facility he had in America,” he said. “It was like a sister school. It was opened for six months. Wrestling is not as popular like in America. It didn’t’ last long.”

He later added, “You can get to a certain level but if you want to kick it up to another level you need to get more experience with people who have more than you.”