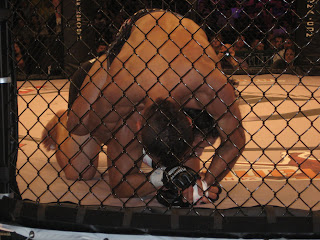 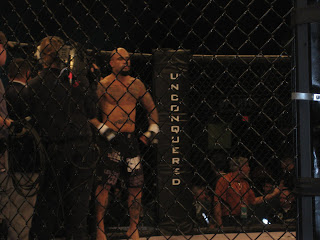 Coral Gables—Miami’s own Rene “Level” Martinez was too much for his opponent Charlie Champion as he dominated his opponent Friday night at the University of Miami ’s BankUnited Center in Coral Gables.

Martinez, who was escorted by an entourage that included hip-hop artist Fat Joe, defeated Champion with a technical knockout at the 1:55 (TKO) mark of the first round at last week’s “Unconquered1:November Reign”. The large crowd was excited to see Level, who is undefeated in his young Mixed Martial Arts career with a 2-0 record, win in the 170 pound category.

Martinez , who trains with MMA masters, defeated his opponent Bounmy Somchay in his debut at the Seminole Hard Rock Casino winning a three-round unanimous decision in September.

Just like another South Florida MMA gladiator, Kimbo Slice, Martinez made a name for himself with the airing of his backyard brawls through YouTube.

In Friday’s fight, Champion started off the bout by shooting for a take down, but Martinez countered for a choke. Both fighters got on their feet. Martinez , 35, later out powered Champion by taking him down to the floor and landed a flurry of punches on the mount, which made the referee step in to call it a night.

“He is too strong,” said Champion to his trainers of his defeat.

After his victory, Martinez mingled and took pictures with the large crowd who came to see his win.

On the card’s main event, Luis “Baboon” Palomino defeated Rafael Dias at 4:47 of the third round on TKO.

Palomino, avenged his recent loss, where his opponent defeated him by a rear naked choke.

Both Palomino and Dias tested each other out in the first round. The Brazilian fighter Palomino took a shot at Dias by landing a low right kick. Dias later went for a take down, but both got on their feet and spent a sometime in the clinch. A short time later, Dias had Palomino in a tight guillotine for a lengthy period, but Palomino managed to escape in nice fashion. Baboon ended the round by landing punches on the ground that did some damage.

In the second, both fighters danced around the cage and Dias went for a take down again tripping Palomino to the floor. Towards the end of the second round, Palomino started his road to victory as he cornered Dias landing several punches and combos that sent Dias to the floor to take a nap, but was rescued by the bell.
In the third, fighters patiently waited to land a blow, but eventually ended in the clinch after Dias attempted another take down. In the end, Palomino defeated all odds and ground and pounded himself to victory as the referee stepped in to stop the fight at 4:47 in Round 3.

In the most exciting fight of the night, Martinez ’s former opponent, Somchay lost to his opponent Eric Morel by unanimous decision after a competitive bout that had the crowd on its feet.

Both gladiators fought to the end, as each connected vicious kicks and punches that had crowd wondering who would win? However, the crowd was not pleased with the judge’s decision awarding the fight to Morel.

In one of two women’s bout, American kick boxer and television personality, Felice Herrig came out on top as she beat Michelle Gutierrez in with an arm bar in the second round.

Here are the rest of the results: