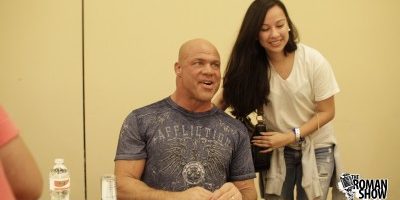 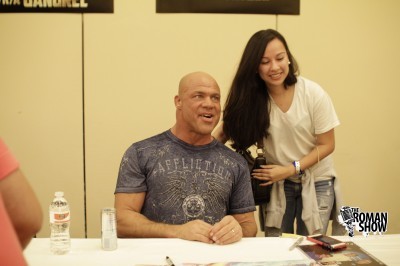 After his Farewell tour, legendary TNA Impact Wrestling’s Kurt Angle plans on taking time off, but wouldn’t rule out the possibilities of fighting inside the cage.

Angle was part of this weekend’s Legends of Wrestling event in Miami, where he made a cameo during the event.

He spoke to The Roman Show about the possibility of fighting inside the Bellator cage. He recently signed to commentate for the promotion.

“My next date is February in Houston,” he said. “The main event is Royce Gracie vs Ken Shamrock. I’ll be commentating some on that night. They are having me get my feet wet maybe later down the road if I do decide to fight the chances are one percent that I fight and 99 that I don’t. I don’t plan on fighting but if I feel good, my body is going well I might consider it down the road. But right now I’ll say no. But I do enjoy being part of Bellator. They have their own theory with what they want to do. They take chances and I love it. They are different.”

He also spoke about who could be a potential opponent.

“When it comes down to it look, I am 47 years old. Kenny and Gracie are in their early 50’s, Dan Severn is in his early mid-50s. Of course, I am not going to wrestle or fight someone in his prime. It’s not going to happen. It will be one of the older guys. But it will be a hell of fight whether its Kimbo Slice, Ken Shamrock, Dan Severn or who ever it is or even Royce Gracie. But if I do decide it will be with a hall of famer not someone in their prime.”

He also spoke about training other martial arts.

“I’ve done jiu jitsu,” he said. “I’ve done it a couple years. I was getting the hang of it. Its hard as an Olympic wrestler with the technique. But once you get the hang of it, it flows.”
Angle is on his farewell tour from Professional wrestling and has his plans set on his involvement with the business.

“I think down the road. I am going to take a year off. I am going to have fun with Bellator. I signed with an agency in Hollywoood. I’ll get into some acting. I want to take some time off and spend time with my family. I’ll see where it’ll take me.”