You are here:
FEATURED ARTICLESInterviewsRockUncategorized 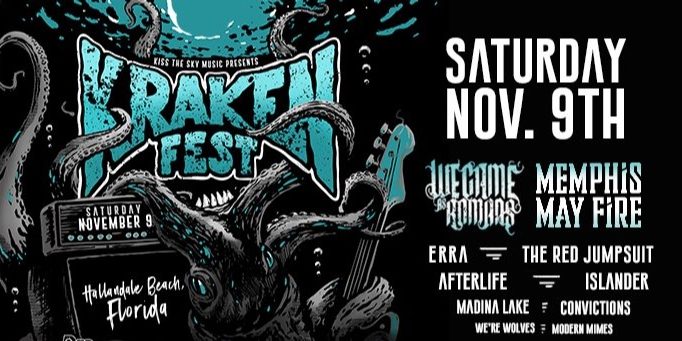 Passion is the inspiration behind the inaugural Kraken Fest.

The co-founders of the inaugural Kraken Fest Freddy Escobar and Marcelo Ferreira started the festival after many heavy metal shows have started to abandon South Florida. As metal heads, they wanted to bring back the music to their backyard and share the experience with other fans.

We Came As Romans will headline Kraken Festival.

“My best friend and I Marcelo Ferreira, who works in the marina industry, we grew up going to Orlando and north Florida a lot even other places to see good shows. When we were in high school in 2000 and 2004 rock was in. P.O.D. was number one on MTV’s TRL. Then the scene dwindled away. The Buzz Bakesale festival left and Halloweenie Roast Festival left and then the radio stations left,” said Escobar who works in finance. “Warped Tour was everlasting and honestly, we had an idea in February. We said we were in a place in our life where we’ve done well in our career and bring back rock to South Florida.”

And so, the metal head friends created Kraken Fest with headliners We Came As Romans and Memphis May Fire. Other bands on the bill feature Afterlife, ERRA, local bands and more.

Originally, the festival was set to take place in Palm Beach County, but the founders decided to bring it to Broward County after the venue offered better amenities, which Escobar described as risky.

Both Escobar and Ferrero don’t plan to have Kraken Fest as a one hit wonder. In fact, they plan on heading to the war room November 10, 2019 to plan next year’s event, which could be outdoors.