King of Pop lives in This Is It 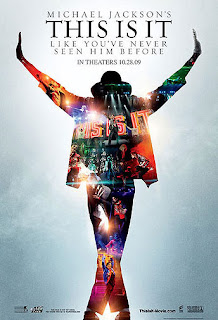 Michael Jackson’s documentary “This is It”, is truly it for MJ fans who miss and adore his music. The well edited and directed film takes an inside look to the King of Pop’s preparation of his comeback tour properly titled, This is it. The film offers fans what the concert would have been if he were alive today. And, trust me, the concert would have been one for the books as the production and tour directors, including Kenny Ortega planned an awesome show including 3 dimensional video and lots of fireworks. MJ fans who would have attended the show would not have been disappointed, after his two hour and some change concert.
In the film, the set includes hits such as Thriller, Billy Jean, Sexual Healing, Earth, and topped off the show with Man in the Mirror. Despite all of the rumors that he was sick and ill prior to his death in the summer, the man proved that he indeed was in shape and ready to do what he does best, entertain. Jackson was dancing like he was in his prime jumping around like a kid; he even got on his back and kicked upward after his “beat it” performance. He was full of energy and all the talk that he had heart problems seemed false, since he looked alive and kicking. I guess, bodybuilder, Lou Ferrigno trained him well.
One notable thing of the film is how the entertainer is such a perfectionist. The man really wants everything superb from the music to the dancing; he wants no mistakes on his show. At one point, MJ tells his pianist how he wants Sexual Healing to start. MJ asks that he start with a lengthy note that simmers. Once it ends, Jackson planned on singing, but he wanted the crowd to feel the song before he got it going. It’s funny how he leads his band and dancers. It’s not like your angry boss who yells and throws paper at you. The man basically commands people on what to do, but right after tells them, “God bless” in mellow tone of voice. Jackson is so good at what he does that his tour director asks him for advice on what the show should look like.
I don’t want to ruin the documentary for you, but if you are a Jackson fan this is it and you need to watch the film, since it is running in local theaters for only two weeks. While you watch the film, don’t be a shame to get off your movie seat and start jamming because his music will make inspire you too put on your dancing show and dance the night away. Plus, trust me, you won’t be the only one. I heard several people behind me singing. Check out the flick, you won’t be disappointed.