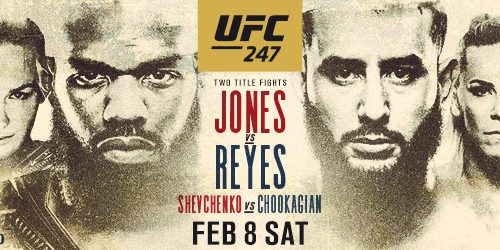 The Ultimate Fighting Championship’s best pound-for-pound mixed martial artist and light heavyweight champion Jon Jones (25-1) puts his title against the undefeated Dominick Reyes (12-0) this weekend, but the man with the strap is not impressed with his opponent’s goose egg.

Jones and Reyes are the main event for UFC 247 in Texas this weekend live on ESPN Plus. Valentina Shevchenko also puts her straw weight title on the line against Katlyn Chookagian in a scrap expected to produce fireworks.

In previous interviews, Reyes stated that Jones hasn’t fought any athletes. Labeling Jones past opponents in their respective martial arts background such as a wrestler or striker. But Reyes defined himself as a complete athletic opponent.

Jones isn’t impressed with Reyes comments and has gone as far as looking to his next fight. In fact, he went on the record stating that if he were to successfully defend his title, the Jon Wink product will climb up the weight class. He wants to challenge the current heavyweight champion Stipe Miocic. Jones believes he doesn’t need a heavyweight tune up fight stating he is ready.

But before he leaps over his opponent this Saturday, all the odds lead toward a Jones victory.

All sportsbooks reviewed here are pretty much all aligned on the Jones vs Reyes odds. Bones is between -450 and -465 to retain his title belt, with Reyes coming back at +325 to +350. The odds briefly moved in Reyes’ favor immediately after they opened, but were quick to move back in favor of the champ shortly thereafter. Unless and until Jones actually loses a fight in the Octagon, expect public bettors to back him heavily.

But in case there is a surprise, Reyes said that he would offer Jones an immediate rematch.

Fight fans are in for a treat nonetheless. Let’s just cross our fingers Jones doesn’t get in trouble again.