Jacare Souza is just “chilling” prior to fight with Kelvin Gastelum 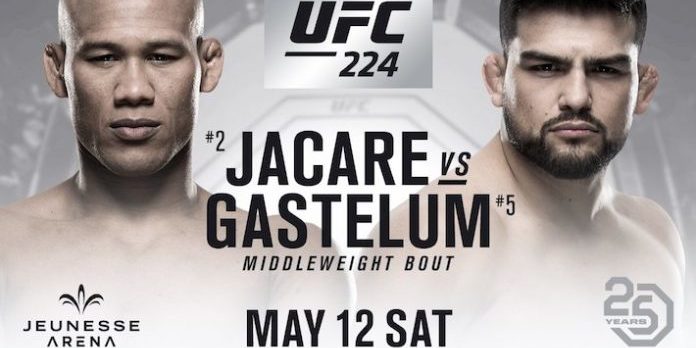 Ronaldo “Jacare” Souza is looking at fighting three times this year, something uncommon.

Souza will battle Kelvin Gastelum this Saturday at UFC 224 taking place in his birthplace of Brazil.

Souza spoke to The Roman Show days from his fight. He is feeling better than ever.

“Really happy,” he said through a translator from Brazil. I am in great shape. I did a great camp. I have confident that I will earn a victory.”

He recently changed training grounds and is now sharpening his tools in Florida.

“The only difference (in this camp) is that I don’t have a lot of contact as I did before,” he said. “That’s a major difference.”

He is coming off a victory in January against Derek Brunson. Souza contemplated taking off his gloves for good, but had a second thought.

“I was about to retire,” he said. “I am in the best shape of my life. I am ready to go and I look at doing three fights this year.”

For the most part in his career, he has competed twice a year. Two victories could potentially have him getting a crack at the middleweight champion. That’s why he’ll keep a close eye on the main event of UFC 225 Yoel Romero vs Robert Whittaker for the UFC middleweight title in Chicago.

“The fights getting close,” he said. “Both guys can do pretty well. I don’t care who wins I just see myself fighting the champion. Both guys are great guys and fighters. I’ll be ready.”

Souza has faced both to defeats. Meanwhile, he is going in this fight with positive vibes.

“I am just chilling,” he said.