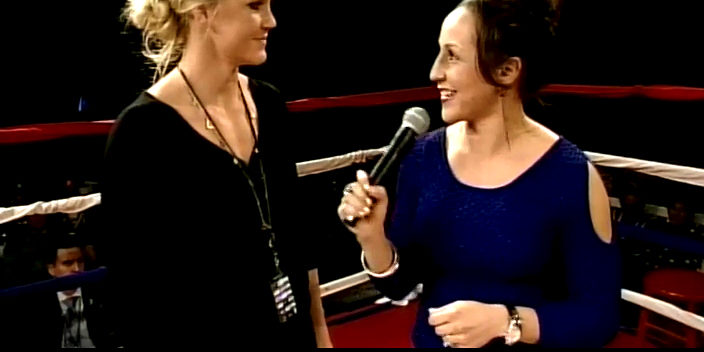 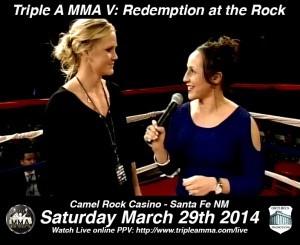 Invicta FC fighter Jodi Esquibel (3-1) knows the struggle of cutting weight before jumping on the scale that’s why she is leading an initiative catered to fighter’s good health.
Esquibel joined The Roman Show to talk about a new method to help fighters.
Triple A MMA has partnered with the Echo Group, LLC to offer IV rehydration therapy to fighters following weigh-ins for ‘Triple A MMA V: Redemption at the Rock’ March 29. This one of a kind program is being offered by the Echo Group, a New Mexico based Medical Resource Company, to ensure combat sports athletes are well hydrated prior to competition. Licensed EMS staff will be on hand at the weigh-in event on March 28, for fighters who wish to take advantage of the service.
IV rehydration is a legal way for combat sports athletes to hydrate safely and medically. The cost to the fighter is minimal and can be deducted from their purse. IV rehydration is optional and a safe alternative to oral rehydration.
Esquibel is an EMT and commentates for the promotion.
“Being a fighter I know what it is to cut the water weight and not being a hundred percent,” she said. “Some of these guys are getting the IVs from whomever they know behind closed doors”
She added that safety should always be on the radar.
“Guys of have been doing it from the low to the high level when it comes to IVs. I’ve been a paramedic for 7 years,” she said.
She later added about the issue: “Am a fighter I know what my body goes through. It takes time to get my electrolytes to get back,” she said.
Esquibel, known for her top boxing, hasn’t fought since last year. She says she has been keeping busy despite Invicta FC still not hosting a fight card. She thinks very highly of the promotion.

“I am sure they had a bunch offers,” she said. “I trust Shannon in what they do with the company.”
Although she hasn’t been inside the cage, she says she has kept busy.
“I try to stay busy,” she added. “I took a boxing fight in New York a couple of months ago. I’ve had mma offers, but I thought we were getting closer to an Invicta card so I held back. I also own a yoga studio.”

Hear more from Esquibel about her fighting career and more.