INNOCENT PEOPLE ARE DYING AND NO ONE IS PAYING ATTENTION 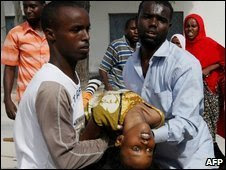 While the nation worries about the swine flu pandemic and sticking their nose into a Catholic priest personal life after he had an affair with a woman, there are hundreds of innocent people being killed for political reasons. Sure, these people have lived in fear for something now because their government has a strong say and control of their country, but the world must take notice of these genocidal acts.
Let’s travel to Africa where thousands of residents of Somalia’s capital are escaping after fighting is increasing the death toll. More than 120 people were killed in recent days, according to health officials. The president of that country, Sheikh Sharif Sheikh Ahmed is blaming radical Islamists for renewed warfare and he says his government has no interest in putting a stop to the violence. The fighting has been going on since 2006. Since the downfall of the country’s central government in January 1991, Somalia has experienced almost non-stop conflict.
The United Nations has taken notice of the incident and has called for a seize fire, but nothing has happened.
If you are planning to visit top tourist destination Sri Lanka anytime soon, you might want to return that plane ticket. This isn’t a story about ruining your vacation, but it’s really about saving your butt. This country, which is known for its beautiful beaches and rain forest, is under attack. Just today it was reported that a mortar shell struck the only functioning medical facility in the country’s northern war zone. At least 49 people died and more than 50 were injured. This weekend, hundreds were killed in the war zone. Residents are fleeing in all directions; they want to feel safe and be able to protect their family. Now here is the story why this country is in the midst of warfare: The Tamil minority is fighting for a homeland. The group has been fighting for land for more than a quarter century. The government refuses to bestow want the Tamil minority is asking for. Thus, residents lose their lives over a struggle they have nothing to do with.
Journalist and aid workers are banned in this area nor is the government accepting any help. Rebel leaders are asking international governments to ask the Sri Lanka government to stop the attacks. The U.S. government has the rebels listed as a terror group. The E.U. blames the artillery assaults on the government. The United Nations just like other international organizations is failing to take notice or action against this other attack. Thus, these areas are overlooked and sadly innocent people are losing their lives in a matter of seconds. Countries must step up to the plate and enforce some sort of action to help these people who can’t defend themselves. In conclusion, the governments should stop worrying about invading other countries to gain something out of it like, ah hem, oil. What they should be worried about is saving lives. After all, major countries like the United States is supposed to be a leader and role model of the free world. Right?