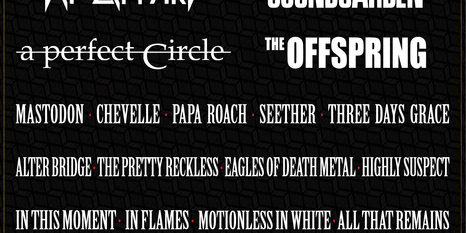 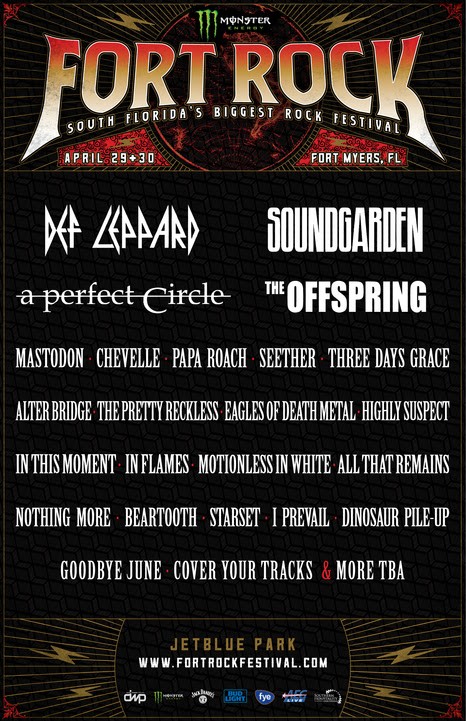 Specially priced tickets as well as VIP packages for Monster Energy Fort Rock will be available starting Tuesday, December 6 at Noon EST at www.FortRockFestival.com. Fans are encouraged to buy early and save.

Here are comments from some of the Monster Energy Fort Rock artists:

“We are thrilled to return to Fort Rock — Florida crowds are some of the best in the world!” — Dexter Holland / The Offspring

“Fort Rock festival is coming again guys! Hailing from Chicago, IL, we always look forward to heading down south to Florida to warm up, stretch our legs and hopefully still head bang our way right into, or right through your hearts! Yes indeed, we will see you soon!” — Pete Loeffler / Chevelle

“We’re stoked to be kicking off the World’s Loudest Month at Fort Rock with Alter Bridge. It’s gonna be epic so don’t miss it!” — Myles Kennedy / Alter Bridge

“Fort Rock turns 5 this year, and South Florida’s biggest rock ‘n’ roll getaway is only getting bigger! The hottest acts in rock and metal today get to share the bill with absolute legends like Def Leppard, Soundgarden, A Perfect Circle and The Offspring. We can’t wait to party and kick off the World’s Loudest Month by celebrating five years in South Florida at JetBlue Park this April,” says Clay Busch, Vice President of Marketing and Strategic Partnerships for festival producer Danny Wimmer Presents.

Specially priced tickets as well as VIP packages will be available starting Tuesday, December 6 at Noon EST at www.FortRockFestival.com. Initial ticket prices will be as follows:

Hotels will be available via the Curadora and Cooper Hotel Group links found on the Monster Energy Fort Rock website.

As in the past, General Admission ticket discounts will also be available for active military through Monster Energy Fort Rock partner GovX (www.govx.com).

The festival is fueled by Monster Energy. Additional 2017 sponsors include: Bud Light, Jack Daniel’s, and FYE, with more to be announced.

JetBlue Park is the spring training home of the Boston Red Sox, located at 11581 Daniels Parkway in Fort Myers, Florida.