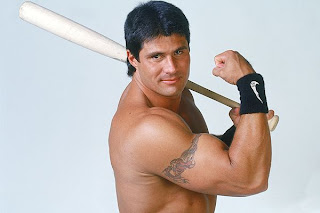 Former Oakland A’s baseball player/whiner, got his face nailed by several punches in his debut in mixed martial arts in Japan.
The former reality star/steroid user was knocked out by South Korean super heavyweight Hong Man Choi in 1 minute, 17 seconds in the first round at Yokohama Arena.
The 7-foot-2, 330-pound South Korean beast, who has a 2-2 MMA record, pounded Canseco’s head, until the referee stopped the fight.
Canseco, who injured his knee in the fight, only got to land one blow with a right to the upper body of Choi, but that surely wasn’t enough to damage this South Korean animal.
Canseco has tried to make it into the fighting word as he boxed a former child star, Danny Bonaduce and Philadelphia Eagle Vai Sikahema. He lost to Vai Sikahema.
It’s obvious this man is a wash out and has lost all of cash, after spending it on God knows what. He tried getting cash by whistle blowing former teammates on steroid abuse; he tried to make it in the celebrity reality shows, and now he wants to be a fighter. Surely enough, he is entertaining, but it sad to say that this man at one point went to my alma mater, Coral Park Senior High School, and was a highlight of this school. In fact, county officials named a street after him near the school, but finally came to their senses and dropped the name.
What’s next for Canseco? Well, more than likely some more ass kicking. Trust me, I don’t think the UFC would like to ruin their reputation by adding a has been into their roster not even if it means ratings for one pay-per-view.