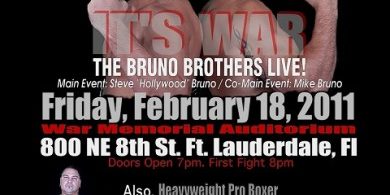 On Feb. 18, I will be hyping the mixed martial arts crowd at Howard Davis Jr.’s Fight Time 3 “It’s War” at the War Memorial Auditorium in Fort Lauderdale. The card will be featuring the Bruno brothers along with pro boxer, Bruce Bellocchi’s MMA debut. Don’t miss me as I electrify the audience as I will be the night’s hype man. Get your tickets now at www.fighttimepromotions.com.