BE THERE, THE FAIR—AND BE ENTERTAINED! 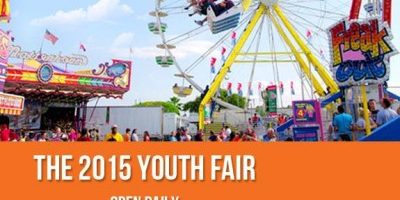 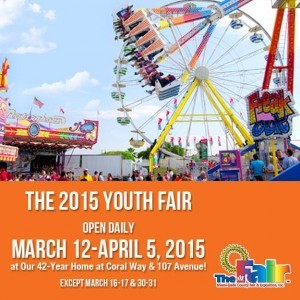 BE THERE, THE FAIR—AND BE ENTERTAINED!

ODYSSEY: A MAGICAL JOURNEY
Odyssey is an exciting, magical journey through space and time that you’ll never forget. The all-new production for 2015 features spectacular illusions you won’t want to miss. Enjoy original grand illusions, hilarious moments of comedy magic, stunning costumes, and a finale you won’t see coming. Located at the Fuchs Pavilion.

ARCTIC GAMES HIGH DIVE ACT
Humans cleverly dressed as Penguins perform real Olympic dives and stunts from over 80’ above the pool at the Extreme Zone.

BRUCE SARAFIN “THE WORLD’S RECORD JUGGLER”
Featured in the Guinness Book of World Records for his juggling acts, which include juggling chainsaws, saw blades and machetes!

BEER HAVEN
Craft beer experience with 60 taps with a Beer Festival every Saturday. Admission to the Beer Haven Festivals on March 14, 21, 28 and April 4 require purchase of separate festival admission. For prices, visit www.fairexpo.com.
Outdoor seating and LIVE entertainment daily.
An educational 18 ft. trailer with a 5-barrel brewery system called the Great American Beer Station will show guests how beer is made. It is the largest mobile brewery in the world.

OPA OPA SALOON
The Opa Opa Saloon is back with its comfortable country setting, now located next to the Crazy Mouse roller coaster on the midway. Guests will be able to sample a fine craft beer selection, a variety of wine, as well as Sangria, homemade with fresh fruit.
Visitors can try the brand new wine based margaritas or even a refreshing Piña Colada, along with the signature Opa Watermelon or Blue Moon craft beers, both served cold in harmony with slides of their corresponding fruit. Catering to local tastes is the Big Rod Coconut Ale from Miami Brewing Company and the Lagunitas IPA.
If you’re stopping by the fair, swing by this comfortable lounge, beat the heat and enjoy the game. There’s never a lack of good company at the Opa-Opa Saloon.

COWTOWN
This hands-on entertainment experience will have kids enjoying a live cows and
SHOW ME SAFARI PIG RACES
Pigs can’t fly …but they sure can run.
Watch your favorite little ham race its way to the finish line everyday at The Oasis.

Friday, March 13, 8 p.m. – COUNTRY CONCERT featuring Rodney Atkins.
Rodney Atkins – This Tennessee native has an impressive track record in the Country music industry, with six number one hits from his first three albums and has sold more than four million singles in the past five years alone.

Saturday, March 14, 7 p.m. – FREESTYLE CONCERT featuring Shannon, Judy Torres, Johnny O and Nice & Wild:
Go back in time with this awesome line-up of some of the most popular artists in 80’s Freestyle music.
If you liked Come Into My Arms by Judy Torres, Let The Music Play by Shannon, Diamond Girl, by Nice & Wild or Fantasy Girl by Johnny O, this concert is a must see.

The Fritters
Tadpole & Katie the Clowns
Bruce Sarafian “The World Record’s Juggler”
“This is without a doubt the most wide-ranging and overall best concert and everyday entertainment package The Youth Fair has had for its guests in decades,” said Bob Hohenstein, president and CEO. “And always every concert and every show is free with admission.”

The Youth Fair runs from March 12 – April 5, 2015, except March 16-17 and 30-31 at Tamiami Park which has been its home for 43 years, located at Coral Way (SW 24th Street) & SW 107th Avenue. Gates open at 3:00 p.m. March 12, 13, 18, 19, April 1 & 2. Gates open at 12 noon all other operating days. Admission is $12 with free admission all day, every operating day for guests 5 years and younger and 65 years and better. Admission is also free all day for active duty and retired military personnel (with valid military ID) on Opening Day, March 12 and each Wednesday. NEW in 2015 is The Youth Fair Fun Card, which allows guests to pay $25 for one admission each operating day, plus includes one free Souvenir Cup. Additional discount offers and coupons are available at www.FairExpo.com. Parking is free every day, all day. The Pay One Price Unlimited Ride Card is $28 weekdays, $35 on weekends.