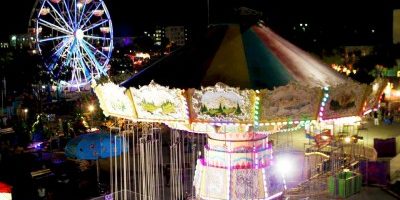 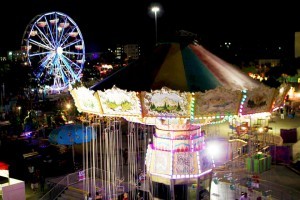 Filled of excited and thrills, the Miami-Dade County Youth Fair is sure to entertain and The Roman Show could send you in for free.

From flaming divers, jugglers and a petting zoo featuring Kangaroos and camels, the Fair has excitement for everyone.

• Odyssey is an exciting, magical journey through space and time that you’ll never

costumes, and a finale you won’t see coming. Located at the Fuchs Pavilion.

over 80’ above the pool at the Extreme Zone.

▪ The celebrated Royal Hanneford Circus entertains “children of all ages.” This year’s

Clown, the Gaucho Act and Mayya and the Housecats.

• Featured in the Guinness Book of World Records for his juggling acts, which include

• Craft beer experience with 60 taps with a Beer Festival every Saturday. Admission

• An educational 18 ft. trailer with a 5-barrel brewery system called the Great

American Beer Station will show guests how beer is made. It is the largest mobile

brewery in the world.

• The Opa Opa Saloon is back with its comfortable country setting, now located next

to the Crazy Mouse roller coaster on the midway. Guests will be able to sample a

fine craft beer selection, a variety of wine, as well as Sangria, homemade with fresh

Colada, along with the signature Opa Watermelon or Blue Moon craft beers, both

served cold in harmony with slides of their corresponding fruit. Catering to local

• If you’re stopping by the fair, swing by this comfortable lounge, beat the heat and

enjoy the game. There’s never a lack of good company at the Opa-Opa Saloon.

goat’s exhibit, as well as give them the opportunity to learn how to make ice cream,

cheese, butter and soap. You’ll even learn how to shell corn with an old-fashioned

hand grinder and how to make syrup from sugarcane.

• The “farmstastic” show will be live in the World of Agriculture Tent.

opportunity of feeding them.

▪ Pigs can’t fly …but they sure can run.

▪ Watch your favorite little ham race its way to the finish line everyday at The Oasis.

• Kids will enjoy meeting all the friendly animals at the petting zoo and going on fun pony rides. Come meet a baby zebra, camel, sheep, alpaca, goats and pigs.