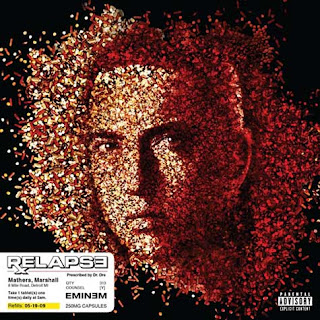 Despite critic’s negative reviews on Eminem’s newest album, Relapse, I must admit that the rapper showcases his talent and makes a triumphant comeback after his last album, Encore, which in my opinion bombed.
In Relapse, his lyrical talent is evident. He tells a story in each song the way he used to in his past albums. His writing is comical and inspirational. He dedicates a song, Bagpipes from Baghdad, to his relationship with Mariah Carey and wishes Nick Canon good luck with his marriage to the R&B singer, at the same time; he asks Mariah to take him back and highlights her disastrous relationship with Latin heart throb singer, Luis Miguel.
In the song, Beautiful, there is a touch of his 2002 song, sing for the moment, which has the Aerosmith beat. Eminem takes us back into his days, when he was an drug addict and motivates listeners to stay away from drugs.
The rapper also has some cameo appearances, 50 cent and Dr. Dre both appear in the album, which is phenomenal considering now a days rappers have 500 appearances in an album.
I can write on and on about this album, but the bottom line is that Eminem is one of those artist that keep me tuned in to rap because, honestly, rap is no longer artistic and entertaining anymore. Lil Wayne and Soulja boy are not rap artist to me. What they really are are grown men rapping uneducated nursery rhymes. So, kudos goes out to Eminem and his new album.