Eddie Martinez to Square off Against a Familiar Face 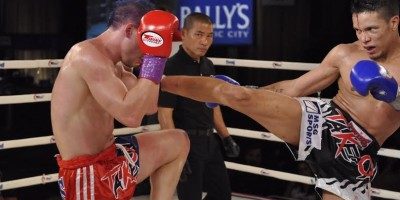 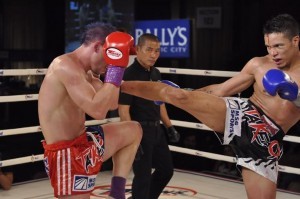 Venezuelan born world champion pro Muay Thai kick boxer Eddie Martinez has a chance will battle an opponent that if he obtains a victory could open new doors.

Martinez will duke it out with Justin Grekiewicz for the WBC national welterweight title part of the Warriors Cup XXII April 11 at 7 p.m. airing on www.gfl.tv.
Hear the interview below.

Martinez of Sitan Gym Connecticut faces Greskiewicz in a rubber match part of the fight card’s main event. The fist time they fought Grekiewicz walked away with a decision win. The second time around Martinez won via TKO.

“It’s a title that is respected that will open a lot of doors to me. I am excited about it,” he said on an exclusive interview with The Roman Show. “Justin is a guy I know well. He is a friend of mine when I see him out shows I see him. He is a great guy. He is a great fighter and he has been around.”

Martinez fell in love with Muay Thai after watching the movie, Bloodsport.

“I got involved after watching Bloodsport,” he said. “I fell in love with the movie. Since that day I stayed with the Muay Thai art. I started Thai boxing like at 11 years old. “

He said that for Venezuelans, competition is in their blood.

“We are great fighters and we love to fight,” he said.

When he isn’t training in the United States, he goes to tests his skills in the mother land of the sport.

“I am in Thailand once or twice a year. That’s where I get most of my fights. There isn’t much here in the United States,” he said. “ I go out there with my coach and train. Thailand is the place to be and scrap it out.“