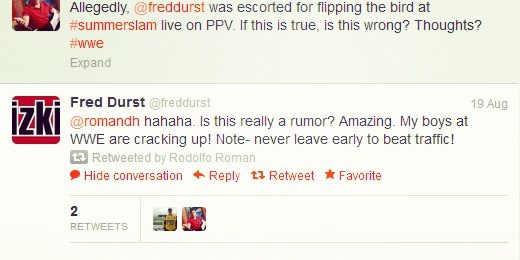 Limp Bizkit frontman Fred Durst flipped the bird, during Sunday’s WWE’s Summerslam pay-per-view. Soon after, rumors swirled that he had been escorted from the Staples Center in Los Angeles, California. Durst later apologized. TMZ.com has reported that a WWE rep stated the company appreciates Durst’s apology, but take their “family-friendly environment very seriously”. Durst explains his reason for his early departure via a Tweet to the Roman Show Twitter account.