Butcher Babies Are Going Back To Their Roots in New Album 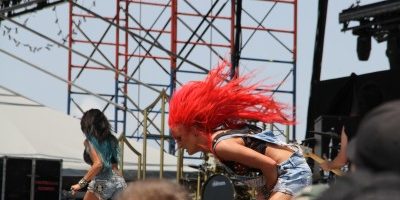 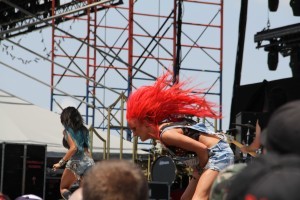 Photography by The Roman Show Staff

Butcher Babies fans don’t have to wait any longer for new music.

While performing at the sold out annual Fort Rock Fest in Fort Myers, The Roman Show caught up with Butcher Babies front women Heidi Shepherd and Carla Harvey, who say the new album drops in the summer.

See the interview, below.

“In the summer it comes out,” said Shepherd. “We are excited about it. We went back to our roots. We’ve been a band for over five years. When we first started we were thrash metal, screaming in your face thrashy and then when we recorded Goliath like four years later we made it a little bit melodic that showed our talent.”

“Metal heads consensus honesty and they relate to honesty,” she said. “All of our lyrics are taken from deep in our guts mostly personal experiences. It is straight from our hearts.”

Butcher Babies were part of the impressive bill of Fort Rock Fest, which included Papa Roach, The Pretty Reckless, In This Moment and Slipknot.

Butcher Babies are currently touring with In This Moment.

The Mr. Slowdeath singers said performing in Fort Myers was remarkable as they debuted a new song.

“It was amazing,” said Shepherd. “We walked out you know the first thing for us is that we want to ignite a party we played a new song today called Ignitor first things first it kind of gets us in the mode. We went out there and started a riot. It was a lot of fun. The response was incredible. The album was written towards the end of last year.”

Hear more from the Butcher Babies as they talk women in metal and more.