DID MCDONALD’S WORKERS FORGET YOUR CHEESE ON YOUR BIGMAC? DON’T BOTHER CALLING COPS. 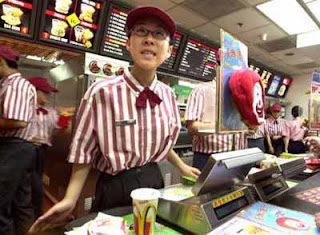 Personally, I barely eat at fast food giant McDonalds. But, the few times I have eaten there, I have had some problems; for example, I order a Big Mac with cheese, yet they forget the cheese. Doesn’t that make you mad? That means you need to go back to the register and complain, when you could have been munching on your fat juicy burger. Well, if such an incident happens, don’t bother calling the cops if the McDonald’s worker was acting foolish with you. An Oregon man spent his Memorial Day behind bars after dialing 911 to complain that a McDonald’s worker was rude and didn’t give him an orange juice he ordered. The man, Raibin Osman, was accused of improper use of the emergency telephone number. So, just a reminder, the next time you are at a burger joint and they aren’t customer friendly, hold your horses and have a little bit of patience. Or, end up in jail for not eating your burger the way you ordered it.