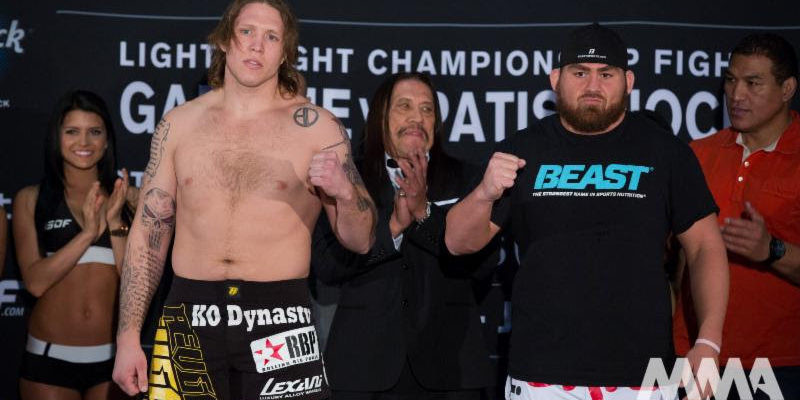 Derrick Mehmen (17-5) and Dave Huckaba (21-5) have yet to step inside the decagon to face each other, but fireworks have already started on social media.

Mehmen joined The Roman Show for an exclusive interview and says he will finish off Huckaba in minutes into the fight of their World Series of Fighting 10 meeting. The heavyweights meet on www.mmajunkie.com June 21.

Huckaba just defeated WSOF president Ray Sefo. Mehmen has taken to social media to take some shots at his opponent.

“It’s a fist fight,” he said. “I say a couple of things and he’ll freak out. The
guy is delusional. He thinks he is doing me a favor by fighting me.
He thinks I am fighting a super star. I am going to beat his ass.”

Mehmen is coming off a five-fight win streak with his last victory coming off Scott Barrett in January. Huckaba will be fighting for the first time this year after recuperating from an injury he suffered at work: He cut his had with a piece of sheet metal and it cut his arteries at work.

Mehmen said he congratulates Huckaba for his Sefo victory, but it’s not how he is making it out to be.

“It was a huge victory,” he said. You defeated a K-1 legend. I am ranked higher than you. I am fighting someone lower ranked than I am. He is brawler that won one big fight now he thinks he is a superstar.”

He later added, “The guy is a brawler. He doesn’t have any wrestling. He has a hard hand and he can strike back.”

He also discussed about training at American Top Team, not worrying about winning a WSOF heavyweight title and his rant on why his fight is not on the main card.