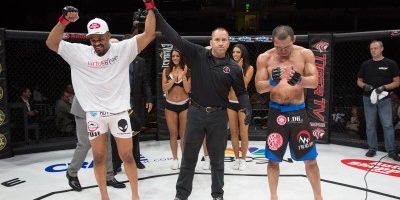 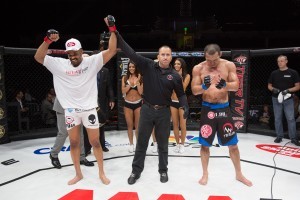 David Branch (15-3) is the current middleweight champion, but that isn’t stopping him from chasing more gold.

Branch steps in the cage against Ronny Markes (15-3) at the World Series of Fighting WSOF 20 fight card April 10 live on NBC Sports Live at 9 p.m. The fight will be for the semi-finals of the light heavyweight title.

Branch joined The Roman Show and said he is looking to be the owner of two belts.
“I am one of the biggest middle weights in the world,” he said. “Off season I can
walk around at 240 lbs. I had to train a little longer to make 185 lbs., but I won’t get out muscled by anybody at 205 lbs.”

For Branch, the opportunity was just there for him to go after another title.
“I looked to the WSOF news and the light heavyweight tournament,” he said. “At first
I wanted to fight at 205 lbs., but then I said you know what I want to win the whole darn thing.”

Branch has been on a role in the WSOF going undefeated winning five fights in the promotion. He credits his new attitude.

“I am not afraid of the bogeyman anymore I am more mature as a fighter. I am confident of my abilities now. I understand and know that I am one of the best fighters at 185 lbs. in the world,” he said. “I looked at myself in the mirror and said am not going to let anybody beat me. That was the change right there. I just believed in myself.”

He said he has his eyes focused on Markes, which could lead him to another title.
“I haven’t followed his career,” he said. “He is a strong guy. I am glad am fighting a guy like him.”