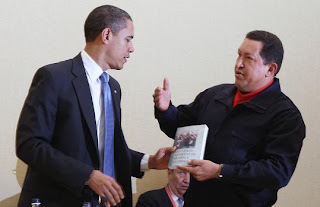 There are several things wrong with this picture. Number one, Venezuelan “President”, Hugo Chavez is shaking president Barack Obama’s hand at the Summit of the Americas, which took place at Port of Spain, Trinidad and Tobago. The handshake isn’t the problem, the ignorance is Chavez handing a book in Spanish to Obama. Ah, excuse me Mr. presidente, but are you aware that Obama is fluent in English? The only words Mr. Obama might just know in Spanish is “Hola” and “Como estas”. No offense to Mr. Obama, but I am sure learning Spanish is the least of his concern. So, Mr. Chavez bestows “Open Veins of Latin America” in Espanol. Do you honestly think, Mr. Obama and his staff have time to catch up with what happened in the so-called revolution’s hey days? They might brief Mr. Obama, but that’s about it. I found it funny, when Mr. Obama said he thought Chavez was handing him a book he personally wrote. At that point, Mr. Obama said he thought of giving him one of his personally written books, which are best sellers. Now, here is what I don’t understand: Chavez gives him the book and the next day “Open Veins of Latin America” is the number two best seller on Amazon bestselling book list. It’s not the time this happens, in 2006, Chavez said at a United Nations meeting to read “Hegemony or Survival: America’s Quest for Global Dominance” written by Noam Chomsky. That put the author in the best sellers list too. In conclusion, it seems that people listen to this egotistical leader because people buy the books he promotes. I wonder how much he is making from advertising the books. Also, I wonder who are the people who buy it? I must admit, I bought Chomsky’s book. But, I bought it out of curiosity. I don’t think I’ll be buying the latest book he advertised. That’s just feeding the devil. Hey, maybe Chavez could start selling homes. He might just get us out of this recession. It seems to be he has a knack for selling things no one wants. I guess, he is a good salesman aside from being a great liar.