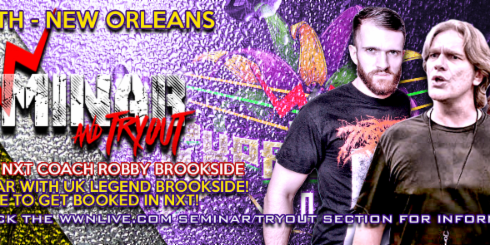 Catch Point’s Tracy Williams and his tag team partner Dominic Garrini are hungry for gold.
Williams spoke to The Roman Show days away from WWN Live’s Evolve 102 in New Orleans, April 5. The event will take place during the Wrestlemania weekend in the Big Easy. Garrini and Williams will be part of the four-way tag match featuring the champions, Chris Dickinson and Jaka, The End and James Drake and Anthony Henry.

He took time to clear the air about the potential conflicts between Catch Point’s manager Stokely Hathaway.

“I wish it could be clarified for me because you are speaking of Stokely Hathaway the man I hired as manager of Catch Point,” he said. “I hired him to make my job easier, but lately that hasn’t been in the case I am hoping throughout the chaos of this weekend things come out ok so we can get back on the right foot.”

He said he respects the tag champions.

“It adds a strange dynamic to the match because everyone is gunning the champions,” he said. “Everyone wants the championships. I don’t envy the champions at this one. The champions are my friends and my group mates but we operate that this is a competition and we are all here to win.”
He also spoke about a WWN Live seminar taking place April 4.

“We never had Robby Brookside before. We are lucky to have Mr. William Regal, Mr. Norman Smiley and several other NXT. I always learn something new from these seminars. It is a valuable training,” he said.
Hear him talk about his career, starting in the pro wrestling business and more.