BRUTUS THE BARBER BEEFCAKE WANTS A MATCH WITH HOGAN; KEITH BERRY IS A NEW FIGHTER 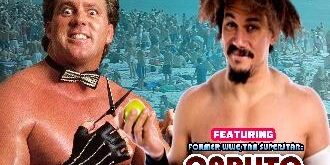 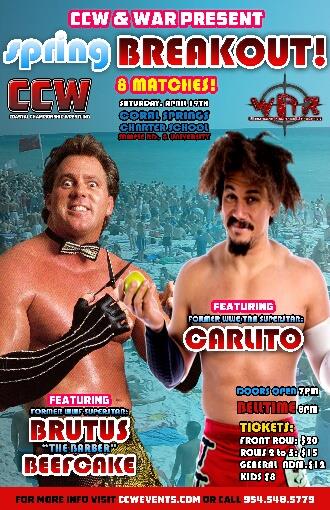 If Brutus “The Barber” Beefcake would return to the World Wrestling Entertainment he says he has his sights only on one person he’d like to battle, his best friend Hulk Hogan.

“I’d like to wrestle Hulk Hogan so I can finally shave his bold head off and make him look good,” he said with a laugh.

Beefcake will be in action at the CCW Spring Breakout event at the Coral Springs Charter School, 3205 N University Dr.,  April 11. Tickets on sale at www.ccwevents.com.

He joined The Roman Show to dicuss his upcoming match and his thoughts on writers and a posible induction to the WWE hall of fame.

“I’ve been wrestling all my life,” he said. “It is what it is, but sooner or later the hall of fame will be calling.”

Beefcake also says having writers takes away from the natural talent of a profesional wretler.

“Things change, its the nature of change,” he said.

He also rememberd his Wrestlemania experiences including a pin over Mr.Perfect, who had a 18-month winning streak coming into Wrestlemania VI.

“It wasn’t about the lights, fireworks or music,” he said. “It was about the guys and matches. Wrestlemanias were different compared to back in 1985 compared to 2014.

Also on The Roman Show, mixed martial artist Keith Berry squares up against Dave Vitkay at the April 11 Bellator card in California.

Berry says he is excited to return home to perform in his own backyard.

“It’s a good hometown energy,” he said. “It’s going to be good to be home and put on a good fight for friend and family.”

Although he has back-to-back losses, he says he has shaped up and improved.

“I recognize some problems I had during camp,” he said. “I ran into some stuff. I am back I feel like a new me.”

He recently returned to train at Xtreme Couture, which he credits for making him better.

“It feels good to have a good team behind you,” he said. “Last year I was doing about 70 percent things right. Now, I am going 100 percent.

Berry also discusses what his game plan is for his upcoming fight and the California mma scene.

Lastly, Rodolfo Roman, host of The Roman Show tells a tale of a local South Florida promotion never been told before.