BKFC 14 will showcase a main event for the ages

You are here:
FEATURED ARTICLESMMA 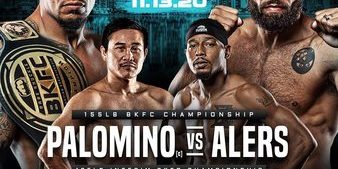 The thrash talk will come to an end on Friday the 13th as Luis Palomino will battle Jim Alers for the Bare Knuckle Fighting Championship (BKFC) lightweight strap.

BKFC 14 takes place in Miami, Florida and can be viewed on the BKFC App.

Both mixed martial artists, Alers and Palomino transition to BKFC and have had much success.

Battle For The Ages

Palomino is undefeated and the same goes for Alers.

In July, the former teammates were supposed to duke it out, but Alers was forced out of the fight when member of his camp were exposed to COVID-19.

The Peruvian Palomino ended up fighting UFC veteran Isaac-Flagg who he defeated by first round stoppage to claim the vacant belt.

Host Rodolfo Roman previews the main event this week on The Roman Show.

A few years ago, Palomino and Alers trained under the same roof, MMA Masters, a mixed martial arts camp located in Miami, Fl.

However, both fighters have pending issues that weren’t resolved and could conclude Friday.

In his young BKFC career, Palomino a veteran of the World Series of Fighting, has also defeated Elvin Leon Brito in his promotion debut.

In mixed martial arts, Palomino is best known for his both battles with current UFC superstar Justin Gaethje.

On the contrary, Alers competed on four occasions inside the octagon having won one fight against Alan Omer.

In what can be a fight for the ages, with Palomino’s flashiness and Alers hard concrete hands, the main event is meant to be a battle that will have the combat sports word talking.

But, the night will also be co-headlined by an interim 135-pound title fight between Dat Nguyen and former boxer Reggie Barnett Jr. Nguyen.