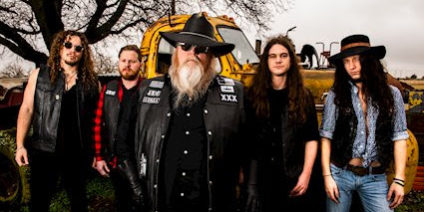 Metal band’s Texas Hippie Coalition (THC) main singer Big Dad Rich is a fan of All Elite Wrestling and some of the songs from the group’s album would be a good theme song for a wrestler.

Big Dad Rich spoke to The Roman Show about the band’s latest LP High in the Saddle released last month.

He said the new record provides something for everyone.

“For the fans, we’ve had around for a long time, there is definitely some stuff they can relate to… We have stuff here like Moonshine and for the new fans we have Stevie Nicks and Ride of Die. At the last couple of shows, I’ve noticed they know the songs from the new album. They just discovered us and they are singing the songs form the album but the older stuff they aren’t recognizing. Seems to be it has been well received with the old and new fans.”

The band traveled with Fozzy led by professional wrestler Chris Jericho. Big Dad Rich talked about his love for wrestling and touring with Jericho, who is on the AEW roster.

“There is a certain thing I tell people in life and that is I thrive to be a one-man empire and Jericho is a one-man empire,” he said. “He has done great things with the music business and now with All Elite Wrestling. What he is doing taking on WWE right by the horn. I have respect for him. I joked around with him on tour. He took on a joke. He is genially a good person, good dude.”

He said he named his youngest son after pro wrestlers Triple H and Kane, hence, his name is Hunter Kane.

He also said he likes WWE, but he is onboard with AEW.

“I think we should aim that market to adults,” he said. “We need people like undertaker, mankind, stone cold people like them are missing from this area.”